July 30, 2017UncategorizedRyan Davis Philip
First Aid Training in Canberra. Lets hope that someone who was knowledgeable in first aid was on the scene to help out.
Dozens Injured as Train Hits Barrier in Barcelona Station. Credit – Facebook/Felix Rios via Storyful

A COMMUTER train has ploughed into a platform and left dozens of people injured during rush hour at a busy station in the Spanish city of Barcelona.

The regional train was arriving at the Francia station in the centre of the city from Sant Vicenc de Calders when it slammed into the buffers at about 7:30am local time Friday.

One person was seriously injured, 19 were injured “less seriously” and 34 were lightly injured, local emergency services said on Twitter. The train driver is among those hurt.

“No one was killed but there are 20 injured, we don’t know how seriously,” a civil protection services spokeswoman said.

Television images showed many passengers being tended to on the platform at the station.

A video posted on Twitter revealed the front of the train appeared to have crumpled as it hit the buffers. Photos posted to social media showed glass shattered over the floor and seats inside the front carriage. 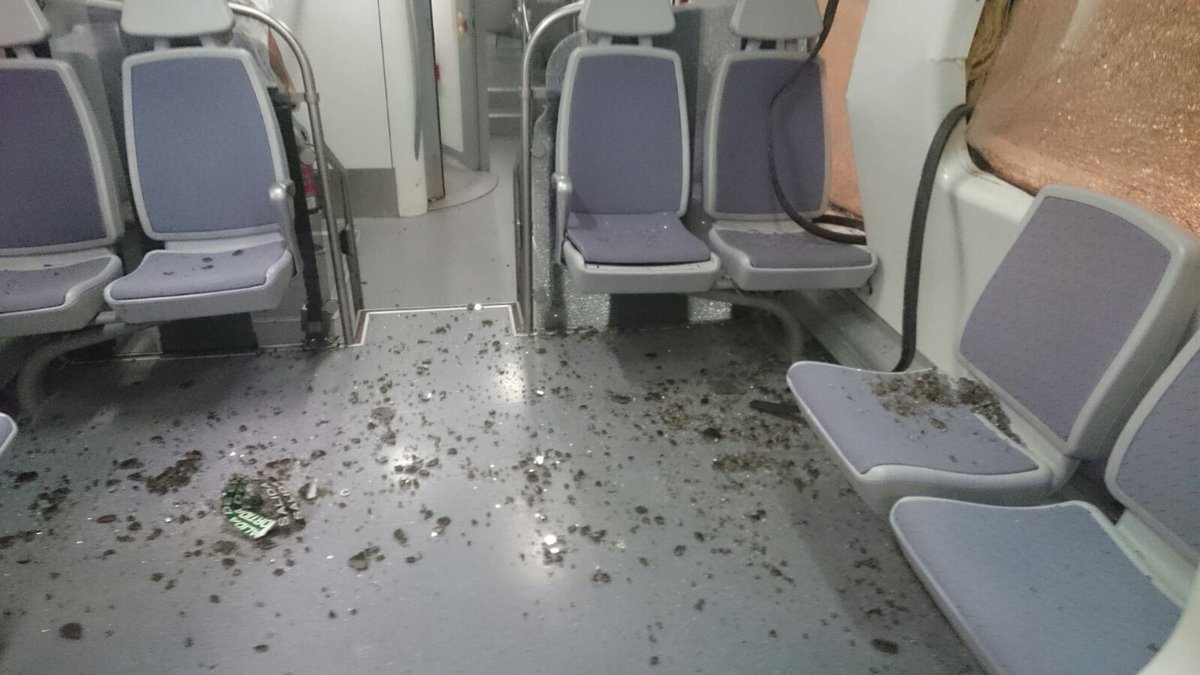 Witnesses said a block of metal thought to form part of the buffer had ended up more than six feet inside the front carriage. Local newspaper Catalan newspaper La Vanguardia reported that some passengers initially feared a bomb or an earthquake.

“The moment of the impact felt like an earthquake,” a witness, known only as Lidia, said.

“People were falling over and colliding with each other. Many fell to the ground because there were people standing up.

“I saw many people with cuts to the head and face from the blows they suffered when they fell.”

Injured passengers are attended to on the platform of a train station in Barcelona, Spain, Friday, July 28, 2017. Picture: AP /Adrian Quiroga.Source:AP

A victim is stretchered along a platform at the Estacio de Franca (Franca station) in central Barcelona on July 28, 2017. Picture: AFP / Josep Lago.Source:AFP

She said others “thought at first it was a bomb” and described them as “frightened”.

At the time of the accident many passengers were travelling standing up, which increased the number of injured.

Radio Cadena Ser said streets around the station were closed to facilitate the emergency services.

Other train services were not interrupted.

The train driver was said to be in a state of shock. He told officials that he hit the buffer at low speed. Reports said the train did not brake when entering the station.

No deaths have been reported, authorities said. The cause of the accident is under investigation.

She tweeted afterwards: “A hug for all the injured and wishing them a speedy recovery.”

The accident comes as Spain this week marked the four year anniversary of one of the country’s worst rail disasters in which 80 people died in 2013 near the northwestern city of Santiago de Compostela.

The train from Madrid crashed as it hurtled round a sharp bend at 179 kilometres per hour – more than twice the speed limit for that stretch of track – in the village of Angrois.

The driver of the train is facing trial.

Book in to a first aid training course at www.canberrafirstaid.com