First Aid Training Canberra. There are many industries starting to add first aid training to their list of priorities but we are still falling behind. Book in to a first aid training course now so you are prepared. Here is a link to our courses.

Ryanair hit headlines recently after a passenger was burnt by scalding tea on one of its flights – and the incident has cast doubt over whether cabin crew are getting the right first aid training.

Val Tredget, 51, suffered burns on her legs after her tea spilt on a flight to Budapest. While accidents happen, the first aid care she then received from a flight attendant appeared to be incorrect.

Ms Tredget, who is a nurse, claims she asked for cold water but was instead given paper towels. She told the Daily Mail: “I pulled the trouser leg up and said, ‘Look, it’s blistering already, I need water. I am a nurse, I know what’s needed’. She just looked at me. I said, ‘You need to pour water on it.’ She ran off to the back of the plane and came back with a handful of blue paper towels and said, ‘Here, use them all.’ I am not quite sure what she thought they would be good for.

She said she was then offered ice and cooling gels, which was backed up by a Ryanair spokesperson. They said: “The customer in question received first aid from our cabin crew including ice, healing gels and a dressing, and declined the crew’s offer of further medical assistance, or being met on arrival by paramedics in Budapest.”

This assertion was reinforced in a letter from Ryanair to Ms Tredget in response to her complaint about the incident. It read: “We sincerely regret this accident but this was not caused by our crew. You were then provided with all of the first aid facilities we carry on board including towels, ice, cooling first aid gels and dressings.”

The Ryanair letter concluded by saying: “May we respectively [sic] suggest that you take more care when handling hot drinks on board an aircraft.”

However, as Ms Tredget had already identified, the “first aid” offered to her totally contradicts the St John Ambulance advice for burns. The organisation recommends the following: “Start cooling the burn as quickly as possible. Run it under cool water for at least ten minutes or until the pain feels better (whichever is longer). If there is no water available, you could use cold milk or canned drinks. 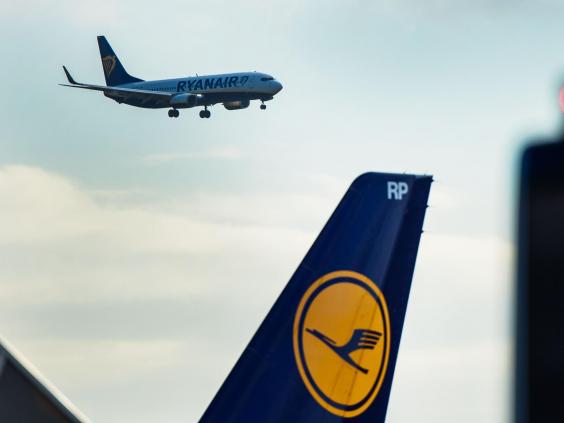 “Don’t use ice, creams or gels – they can damage tissues and increase risk of infection.”

Ms Tredget had peeling skin and blisters on her legs; the incident has now left her badly scarred.

“In my opinion their first aid training must be rubbish,” she said. “Apparently this is the most common accident you get on planes so they should have better training.”

A Ryanair spokesperson told The Independent: “All Ryanair aircraft carry first aid equipment, in full compliance with EU safety regulations, and all crew are trained in first aid procedures. Should an incident occur in flight which requires further medical intervention, our crew divert to the nearest suitable airport and request medical assistance to be on standby before landing.”

China’s New Jet Is Straight Out Of A Sci-Fi MovieHistoryInOrbit.com

However, the airline did not respond when asked why Ms Tredget was given first aid that does not fit with accepted best practice.

“Cabin crew are trained in emergency and standard operating procedures and of course first aid,” Isobel Kearl, national training officer for St John Ambulance, told The Independent. “According to the Civil Aviation Authority, all personnel must receive appropriate regular training in first aid to enable them to provide immediate assistance in the event of an accident. We cannot comment specifically on what content they teach – however, burns and scalds are covered in all St John Ambulance first aid at work courses.”

Independent consumer travel expert and former MD of Holiday Travel Watch, Frank Brehany, told The Independent: “Hot drink spills are a common feature of commercial flights. Sometimes these incidents will occur because of the cramped conditions of an aircraft and sudden turbulence experienced in flight.

“Apart from European and National Regulations, each airline will be further guided by their chief medical officer who will input into how staff are trained and the type of first aid materials that can be carried on aircraft.

“It is clear that there is a dispute between the parties in [the Ryanair] case, but it would ordinarily be expected that swift and appropriate action be provided to an injured passenger.”

He added: “If the allegations are correct, it would tend to suggest that a review of first aid training, either for this crew, or more generally, should be considered urgently.”

Ryanair threatens to cancel flights between UK and EU after Brexit

In addition to the question of training, airlines have come under scrutiny with regards to life-saving equipment.

In June 2015, coroner Alan Walsh urged European airlines to carry defibrillators – which they are currently not required to do – after a woman died of an undiagnosed heart condition onboard a Ryanair flight.

A defibrillator can shock the heart back into action after cardiac arrest, but there wasn’t one on board when Davina Tavener, 47, collapsed.

“If you are, by the nature of air travel, trapped in aircraft without access to any other facility, the authorities need to consider the equipment to be carried on those airlines, whether it’s short haul or long haul.”