Shark lair has been found in the Pacific Ocean

A MYSTERIOUS great white shark lair has been discovered in what experts once thought was a “blank, barren” stretch of the Pacific Ocean.

The surprising discovery shocked scientists, who had no idea the area was home to sharks — and assumed the region couldn’t support their diets.

Hundreds of the deadly sea creatures swim for months to spend their winter and spring in a far-flung area of the Pacific Ocean.

The area, which lies between Mexico’s Baja California and Hawaii, has proved a major mystery for scientists.

But now researchers have tracked the sharks, and visited the “middle-of-nowhere spot”, as first reported in the San Francisco Chronicle. What particularly confused scientists was why sharks were swimming such huge distances.

It seemed especially odd, because it was assumed that the region was “lacking the kind of prey” that great whites prefer.

By a joint expedition by Stanford University and the Monterey Bay Aquarium found that the shark lair had plenty of grub to go around.

According to experts, the area is teeming with squid and small fish that move around in a deepwater are of ocean known as “mid-water”.

This is the region just above the deepest areas of sea, where there is complete darkness. “The story of the white shark tells you that this area is vitally important in ways we never knew about,” said Salvador Jorgensen, a research scientist at the Monterey Bay Aquarium.

“They are telling us this incredible story about the mid-water, and there is this whole secret life that we need to know about.”

He added: “What we’ve learned through the progression of our research is that this mid-water layer is extremely important for white sharks.”

The researchers are focusing on a large 160-mile-radius area that sits around 1200 nautical miles east of Hawaii. 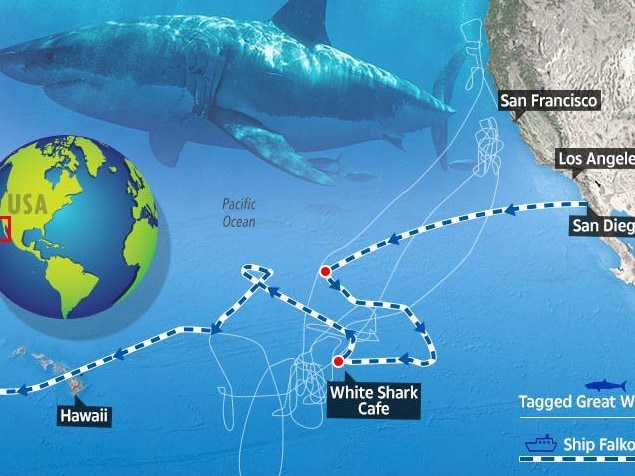 Sharks are navigating wella way from the coast during winter months. Picture: The SunSource:Supplied

Scientists only have a very limited understanding of the region, due to its remote location.

Ms Block found that local sharks were feeding in the “Red Triangle”, an area near Monterey Bay, between August and December.

But each December, the acoustic tags would track a huge movement out to sea, leaving experts baffled.

It turned out the sharks were swimming out to a patch of open ocean twice the size of England — which Ms Block dubbed the “white shark cafe”. To investigate the matter, Ms Block attached acoustic tags to 36 local sharks, as well as satellite monitoring tags with locator beacons that were designed to pop off and float to the surface.

Then, researchers organised a month-long expedition on the research vessel Falkor, in a bid to track down the tags.

Researchers managed to secure info from 10 of that 22 tags that floated to the surface in what Ms Block described as a “white shark treasure hunt”.

“We now have a gold mine of data. We have doubled the current 20-year data set on white shark diving behaviours and environmental preferences in just three weeks,” Ms Block said.

She added that it would “help us better understand the persistence of this unique environment and why it attracts such large predators”. Scientists believe, but can’t say for sure, that the sharks are snacking on small fish and squid.

The experts say that sharks of different genders were also behaving differently.

Male sharks would dive up and down through water in a V-shape, up to 140 times a day.

Females, meanwhile, would dive deep during the day, and shallow at light – creating further confusion for scientists.

“It’s the largest migration of animals on Earth — a vertical migration that’s timed with the light cycle,” Mr Jorgensen said.

“During the day they go just below where there is light and at night they come up nearer the surface to warmer, more productive waters under the cover of darkness.”

This story originally appeared in The Sun and has been republished here with permission.

Book in to a first aid course in Sydney with ww.simpleinstruction.com.au