No longer in my constant care, I can only hope that I have taught him enough to save his own life.

Philip, 13, was born with severe food allergies to egg and tree nuts. That means when he eats these foods his over-active immune system mistakenly thinks they are poison, and attempts to shut his airways to prevent them getting in, suffocating him in the process.

Read more: My son was told he’d never grow out of his food allergies

The only way to stop the reaction is to administer a shot of adrenalin via an auto-injector.

In Australia, the only auto-injector available is called an Epipen which is produced by American big-pharma Mylan and distributed locally by Mylan Australia.

Except they’ve run out.

My daughter was allergic to milk for the first two years of her life but thankfully grew out of it. Philip, however, has grown out of some of his allergies, however those that remain have become worse. 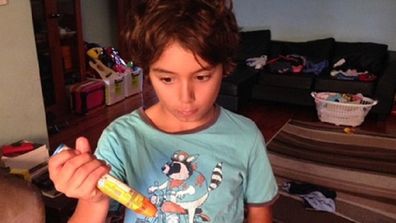 Philip carries two EpiPens with him at all times. Image: Provided

As a teenager, Philip has learned to carry his life-saving medication with him everywhere. He straps an auto-injector pack to his leg wherever he goes. It carried two EpiPens.

Those pens expire in June.

For some allergy families, their EpiPens expire sooner, or already have done.

Maria Said from Anaphylaxis Australia told 9News there has been a series of problems with EpiPens since November 2017 when the EpiPen Junior ran out, and now the adult EpiPens have also run out.

Last March some EpiPens were recalled due to flaws in the product.

“There has been a role on of problems and this has caused some unrest and some anxiety,” she said. “We’re trying to support people through this.”

The only way to access life-saving adrenalin in the absence of an auto-injector is to call an ambulance however when it comes to food allergies, particularly the more severe anaphylaxis, an injection is needed in the first few moments of the reaction.

By the time the ambulance arrives, it’s often too late. 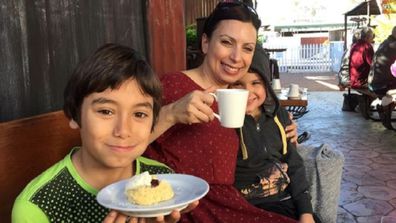 One in 20 Australian children are living with a food allergy and two in 100 adults. Image: Provided

But it’s not the fact Mylan is having trouble doing it’s job that is the real issue. It’s the fact they are the only provider of EpiPens in Australia.

Since when did it become a good idea for a lone big-pharma to be responsible for the manufacture and distribution of life-saving medication?

Since when did it become a good idea for any company to have a monopoly on a life-saving medication or device?

Two years ago a rival product called the Anapen attempted to launch in Australia and the news was music to my ears.

It was a better product, lasting two years instead of the one that an EpiPen does.

The company was never able to establish the Anapen in the Australian market or any market.

That has left allergy families at the mercy of Mylan and it could cost lives.

One in 20 Australian children are born with a deadly food allergy, according to current data, and two in 100 Australian adults are living with the deadly condition.

“First and foremost we have to get to the bottom root cause of why we’ve got this shortage and why these shortages keep happening.”

The Therapeutic Goods Administration (TGA) has approved two alternate products but they aren’t available yet.

Pfizer is the company responsible for manufacturing EpiPen products and has released a statement blaming “manufacturing problems” for the shortages. 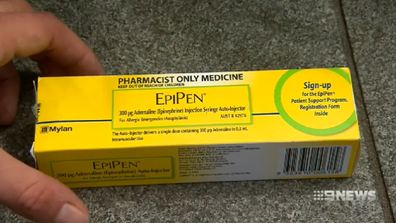 This is the third problem with EpiPens supplies in the past seven months. Image: 9News

Allergy experts are telling allergy families to keep their expired EpiPens and use them as long as the adrenalin inside them isn’t discoloured. This can be observed through the observation window in the product.

Associate Professor of the Australian National Allergy Strategy, Richard Loh, told 9News that while using expired adrenaline is safe, it may not be as affective at treating an allergic reaction.

The TGA has been told new supplies of EpiPens will be available by February 23.

What else can we do?

To learn how to use the epipen in a first aid course please book in to a training session in Dickson at www.canberrafirstaid.com