PHOTO: Forecasters are expecting up to 100 millimetres of rain to fall in Canberra within 24 hours. (ABC News: Ian Cutmore)
MAP: Canberra 2600

Canberra’s wet weather has kept emergency services busy, with work to repair damage expected to continue throughout the evening.

By 4:30pm Canberra Airport had recorded 55 millimetres of rain since Friday morning, with 17 millimetres falling since 9am Saturday.

The ACT State Emergency Service (SES) had responded to 179 calls for help, with localised flash flooding sweeping across the city.

PHOTO: Keep your raincoats handy, as the wet weather is unlikely going anywhere for a while. (ABC News: Gregory Nelson)

The Bureau of Meteorology predicted further downpours across the ACT and surrounding region in the afternoon but said it would ease overnight.

A severe weather warning remained in place as of late Saturday afternoon.

Chief officer at the SES Georgeina Whelan said the worst flooding had been in Gungahlin in Canberra’s north, as well as in Wanniassa and Greenway in the south.

“The number of trees falling is increasing because soil is not absorbing water and that’s impacting the stability of the trees,” she said.

But by 4:30pm she said the localising flash flooding had settled significantly.

“Most damage has been to solar panels in homes and tiling on roofs,” she said.

“They’ve kept crews busy and jobs are still coming in. We will work into the evening so we’re asking people to be patient as we prioritise jobs.”

She said no rivers in the region had flooded, but the Murrumbidgee River could develop moderate flooding over the weekend.

The Bureau of Meteorology forecast the showers would ease late on Saturday, with lighter rain returning throughout the week.

Since 9am Friday the territory had seen more than half of December’s average rainfall.

SES calls in extra staff to cope with busy day

Ms Whelan said she had called in additional crews to respond to today’s jobs, but was not aware of any injuries as a result of the weather. 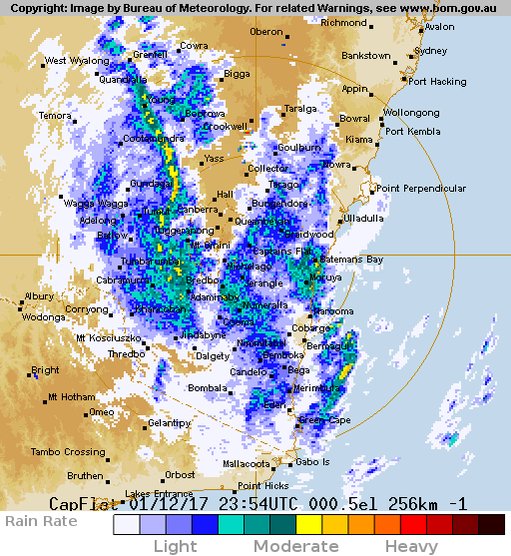 The current radar loop for the A.C.T shows widespread falls. Canberra Airport has received 11mm since 9am this morning with more expected.

“A significant number of ceilings have water is leaking through. People aren’t sure how to respond and generally alarms are going crazy.”

She warned of the electrocution risk and said residents who aren’t comfortable with isolating power should ring 000.

“We are continuing to remind people of the risks associated with stormwater drains,” she said.

If you have a current first aid course certificate help the

Across the border in southern NSW, the SES has deployed extra volunteers equipment and aircraft to prepare for widespread flooding.

NSW SES spokesperson Phil Campbell said the emergency crews’ areas of greatest concern were in and around the township of Tumut, the Albury area and communities on smaller tributaries like Billabong Creek in the Riverina.

“At the moment of most concern is the Riverina through to the Snowy Mountains and the south-west slopes of NSW — those areas are bearing the brunt of current heavy rain, and that rain is likely to continue with localised flash flooding for the remainder of today,” Mr Campbell said.

“We’re urging communities in the affected areas to make sure they are well prepared. To lift pumps and to relocate livestock to higher ground and if they’re expecting to be isolated to make sure they’re well stocked up on food, fuel and other essentials.”

A severe thunderstorm warning has been issued for Saturday evening around Sydney, Gosford, Orange, Moree, Dubbo and Parkes.

“We’re expecting some major flooding on the Sunday on the Murrumbidgee river into Gundagai and some moderate flooding in Wagga Wagga,” Mr Campbell said.

Mr Campbell warned residents to keep out of floodwaters and contact the SES if they needed any emergency flood assistance, rescues or help with sandbagging.

The SES has the following advice for people in areas with severe weather warnings: