Red meat might be to blame for cases of anaphylaxis that have so far eluded an explanation.

Anaphylaxis is a serious, potentially fatal allergic reaction. During an anaphylactic episode, the airways become blocked and blood pressuredrops, leading to troubled breathing or even fainting.

While most cases of anaphylaxis are caused by known allergens in food, certain medications, or insect bites, there are anaphylactic episodes whose causes remain a mystery.

These are referred to as “idiopathic anaphylaxis” (IA) by medical professionals, meaning an episode with unknown triggers. It is currently estimated that 30,000 people in the United States have IA.

In the new study, 70 study participants with IA were examined, and six of them were found to be allergic to a sugar molecule commonly found in red meat, such as beef, pork, and lamb.

Dr. Melody C. Carter — staff clinician in the Laboratory of Allergic Diseases in the National Institute of Allergy and Infectious Diseases (NIAID) Division of Intramural Research — is the first author of what was deemed a “unique, prospective study,” by the researchers.

Their findings were published in the journal Allergy.

The sugar molecule is called “galactose-alpha-1,3-galactose,” or “alpha-gal.” Alpha-gal is found in the flesh of most mammals, and it is believed to be spread by the Lone Star tick.

In this study, Dr. Carter and colleagues found IgE antibodies — a marker of an allergy to the alpha-gal molecule — in the blood of six participants.

“Upon institution of a diet free of red meat, all patients had no further episodes of anaphylaxis,” write the authors. 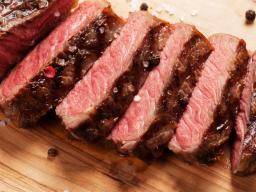 Alpha-gal allergy: What you need to know
We take a look at the causes, symptoms, treatment, and prevention of the so-called red meat allergy.
READ NOW

The reason why physicians had not found the cause of the anaphylaxis they misclassified as idiopathic, the researchers suggest, is that alpha-gal allergy has different signs from other, more common food allergies.

Routine allergy tests do not screen for IgE antibodies, explain the researchers. Additionally, the alpha-gal allergic reaction starts within 3 to 6 hours after the consumption of red meat, which makes it all the more difficult to detect.

“This unusually long time gap between a meal and an allergic reaction is probably a big reason that alpha-gal allergies are often initially misdiagnosed,” says study co-author Dr. Dean Metcalfe, chief of the Mast Cell Biology Section in NIAID’s Laboratory of Allergic Diseases.

“If you start to have trouble breathing in the middle of the night, you probably are not going to blame the hamburger you had for dinner,” Dr. Metcalfe adds.

NIAID Director Dr. Anthony S. Fauci also weighs in on the findings, saying, “Alpha-gal allergy appears to be yet another reason to protect oneself from tick bites.”

“We often think of ticks as carriers of infectious diseases, such as Lyme disease, but the research strongly suggests that bites from this particular species of tick can lead to this unusual allergy.”

“The association is increasingly clear,” Dr. Carter continues, “but we still need to discover exactly how these two events are linked and why some people with similar exposure to tick bites seem to be more prone to developing alpha-gal allergy than others.”

“Food allergies can range from an inconvenience to a life-threatening condition and pose a serious and growing public health problem that urgently requires more research,” adds Dr. Fauci.