Cheerleader punches girl who challenges her to fight

A PINT-sized cheerleader in California beat up another girl who challenged her to a fight while still in her uniform, a dramatic video shows.

The footage, posted early on Saturday, purportedly shows Savannah Sprague, a cheerleader for Clayton Valley Charter High School, brutally beating an unidentified girl who had just challenged her to a fight as the cheerleader sat at a table in Concord while surrounded by other youngsters, some still holding their backpacks.

“Do you want to fight?” the girl tells Ms Sprague, according to the 92-second clip.

“No, nobody wants to fight,” Ms Sprague replies. “You guys want to fight us. Nobody speaks on you guys, nobody talks about you guys.” 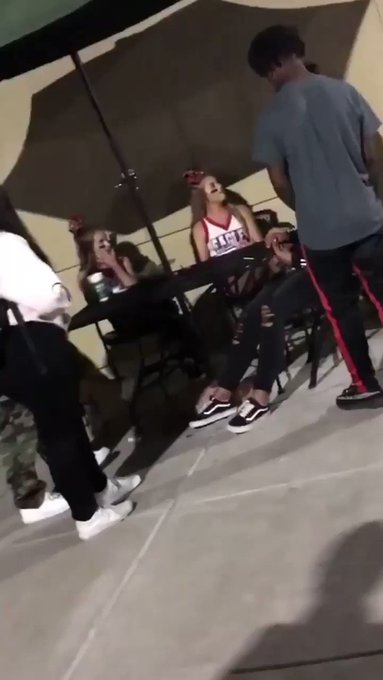 Ms Sprague then tells the girl standing over her to get her finger out of her face, quickly escalating tensions as several witnesses look on.

Seconds later, the unidentified girl slaps Ms Sprague in the face, sparking a brutal fight in which Ms Sprague gets the best of her antagonistic counterpart. At one point, Ms Sprague is seen on top of the other girl, pummeling her with vicious, repetitive, closed-fist blows to her back and face.

“Break it up, break that sh*t up,” one person says off-camera as the girls collect themselves after the fight.

The footage shows Savannah Sprague in the fight.Source:Supplied

Other students at the scene reacted wildly after the melee, including one who spoke directly to the camera and said he loved “watching rumbles”.

Officials at Clayton Valley Charter High School — home of the Ugly Eagles — did not have an immediate comment when reached on Monday morning by The Post. Ms Sprague and the school’s cheerleading coach also did not return messages seeking additional comment.

This article originally appeared on the New York Post and has been republished with permission.