Police officers in Livonia have a new tool that can help save lives — perhaps even their own — thanks to a grant from a nonprofit dedicated to supporting law enforcement.

The $9,000 gift from Spirit of Blue was used to buy 150 Combat Application Tourniquets, or CATs, that all officers carry while on duty.

CATs, designed to be applied with one hand if need be, can stanch bleeding from traumatic wounds to the extremities and are carried by U.S. Army personnel. They were issued this year after officers were trained last year in using them.

Officers can use the tourniquets on themselves or on a wounded partner, as well as on injured civilians.

“You deserve, after every single shift, to go home to your family safely,” Ryan T. Smith, executive director of Spirit of Blue, told officers assembled at the police station Tuesday for a formal announcement of the grant. 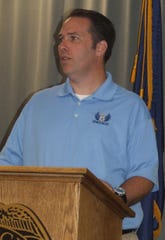 Ryan Smith, executive director of Spirit of Blue, talks Tuesday about a grant from his organization that helped the Livonia Police Department issue emergency-use tourniquets to every officer. (Photo: Matt Jachman)

The tourniquet was used in the field for the first time in Livonia in July, when officers Alex Maher and Dominic Michels were the first emergency responders to arrive at the home of a woman who was bleeding profusely from the left arm. The bleeding stopped immediately, Maher and Michels said; Livonia paramedics arrived seconds later and the woman was taken to a local hospital.

The officers had planned their course of action en route to the scene and training took over as well, they said.

“You’ve just got to try and mentally prepare yourself,” Maher said a few days after the incident. “We did exactly what we thought we were going to do.”

Police Chief Curtis Caid compared the CAT to other lifesaving tools carried by emergency personnel, such as heart defibrillators and naloxone, better known by the brand name Narcan, which can counter the affects of an opioid overdose.

Sgt. Christian Emert, the department’s training coordinator, had sought the Spirit of Blue grant. “I wanted to get (tourniquets) deployed as quickly as I could,” Emert said. “It’s been a godsend.”

Capt. Ron Taig said the issuing of CATs is part of the “tactical combat care” that the department has been emphasizing in recent years. The idea, Taig said, is that police officers are often the first emergency personnel at the scene of a serious injury — “Our scout cars are always out there,” he said  — and should be ready to step in with effective first aid.

Spirit of Blue, founded in 2011, has provided funding for a variety of police equipment, Smith, including weapons, body armor, riot gear and flashlights. If a police department has a need for a tool that can save officers’ lives, but no funding for it, the organization will consider a grant, Smith said.

“We’ll be about this work for a long time,” he said.